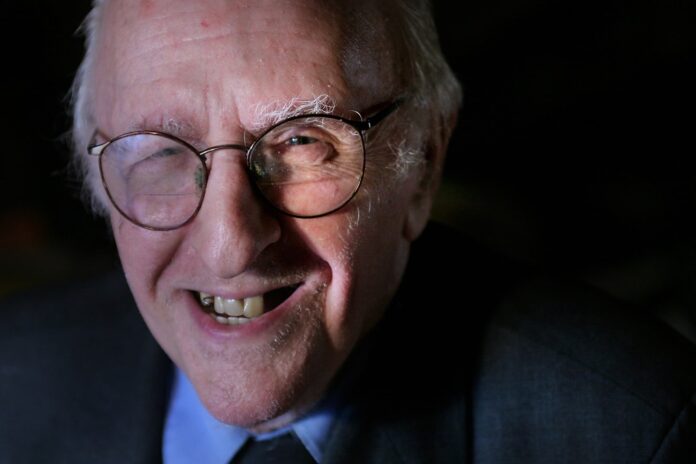 Google honored Dr. Frank Kameny, an American astronomer, veteran, and gay rights activist, with a doodle to celebrate the start of Pride Month. Franklin Edward Kameny was born on May 21, 1925, in Queens, New York, and is widely regarded as one of the most prominent figures in the American LGBTQ+ rights movement.

The Google doodle depicts Frank Kameny walking on a snowy day while wearing a garland of colorful flowers around his neck to show gratitude towards him.

In a blog post, the tech Google stated that “Gifted from an early age, Frank Kameny joined at Queens College to study physics at the age of 15.” During WW2, he also provide his services in the military and then went on to earn a doctorate in astronomy at Harvard University after returning to the United States. He also taught at Georgetown University in the Astronomy department for a year. Frank Kameny accepted a job as a Government astronomer with the Army Map Service in 1957, but he was fired just months later due to an executive order that he was gay which effectually barred members of the LGBTQ community from federal employment.”

Frank Kameny decided to take legal action against the federal government and as a result of this, in 1961, he filed the first gay rights appeal to the Supreme Court of the United States, and then he spent the rest of his life fighting for equal rights in his community. He also organized the gay rights protest at the White House in the 1960s.

He also founded one of the first gay rights advocacy organizations many years before the start of the Stonewall Riots. He also successfully challenged the American Psychiatric Association’s definition of homosexuality as a mental disease in the early 1970s, and later in 1975, the Civil Service Commission finally revoked its ban for LGBTQ personnel,” according to the reports.

However, it was until 50 years after his departure, in 2009, that he received a formal apology from the government of the United States. The next year, a section of 17th Street NW near Dupont Circle in Washington, D.C. was nominated as “Frank Kameny Way” in his respect.

Throughout the month, Google will shower you with colorful confetti whenever you click Search. Pride Month was started in June to commemorate the Stonewall uprising in New York City in June 1969, which helped inspire the modern gay rights movement.

On the occasion of Pride month, Google doodle honors Dr. Frank Kameny, an astronomer, veteran, and right activist of the gay community who has a significant image in the LGBTQ rights movement.

175+ Missing Someone Quotes For Beloved, Family, Your Friends, Your Sweetheart

ABOUT US
Newspaper is your news, entertainment, music fashion website. We provide you with the latest breaking news and videos straight from the entertainment industry.
Contact us: contact@yoursite.com
FOLLOW US
© Newspaper WordPress Theme by TagDiv
MORE STORIES